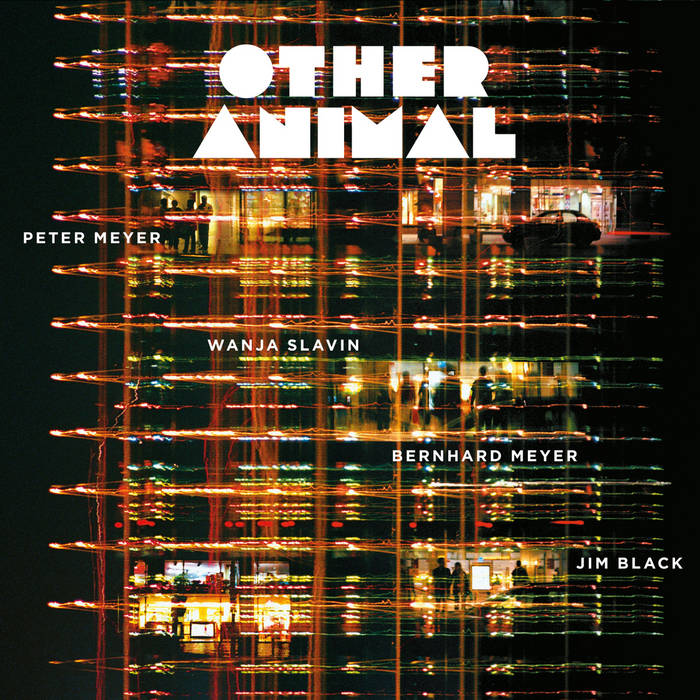 A new formation with old friends, a particular sound with familiar vignettes: Other Animal plays “alternative prog-jazz”. The newest project of Bernhard and Peter Meyer, who take the key roles as composers and producers in this quartet, unites players from Berlin and New York who harmonize perfectly together and inspire each other. The Meyer brothers are best known for their highly acclaimed Melt Trio. With their distinct music and sophisticated stylistics on semi-acoustic bass and electric guitar, they have been contributing to the Berlin-specific jazz sound for years. Beside the already beaten paths of the genre, they fuse elements of improvised and new music, independent-rock and ambient sounds and show how jazz can sound in the present and the future. “Also on their third album, the Melt Trio again plays in a league of its own,” Jazzpodium summarizes and places Peter Meyer among the international ranks of the generation Marc Ribot, Jacob Bro and Marc Ducret. The magazine Rondo labels the trio as “one of the most stunning of the current jazz scene.” As a trio they have always enthralled listeners with their CDs and countless concerts and in addition, they explored other constellations - sometimes together, sometimes separately. For instance with the Norwegian electronica artist and live-remixer Jan Bang, the drum charismatics John Hollenbeck and Nasheet Waits, the exceptional singer Theo Bleckmann and the Portuguese double-bass original Carlos Bica. The Meyer brothers had also worked with Jim Black in the past. Born in 1967 in Seattle, Black studied at Berklee College, then moved to New York and ever since, has been enhancing many projects with his distinctive playing. On the one hand in his own formations, such as the post-rock jazz quartet AlasNoAxis with Chris Speed, the Balkan-oriented Band Pachora, as well as Human Feel, with Speed, Kurt Rosenwinkel and Andrew D’Angelo. Furthermore, Black recorded a handful of albums alongside Dave Douglas and Uri Caine, also for the BBC with Tim Berne and Nels Cline, with Dave Liebman, Steve Coleman, Laurie Anderson and many more. During the same time as these sessions with Jim Black, the Meyers had initiated collaboration with Wanja Slavin. The saxophonist, born 1982 in Freiburg and based in Berlin since 2005, received a Jazz-Echo award in 2014 for the album Starlight, which he recorded with Petter Eldh and Christian Lillinger. Most recently Slavin attracted attention in the quartet Amok Amor (Eldh, Lillinger, Peter Evans), for instance at the Moers Festival 2016, London Jazz Festival and Jazzdor Straßburg. Moreover, he has played with Kenny Wheeler, Médéric Collignon, John Schröder, Joachim Kühn, Alexander von Schlippenbach and others. It was only a matter of time, until these award-winning individualists would unite to form a quartet. In November 2016 the band went to the legendary Funkhaus-Studio in the east of Berlin. The takes were so successful that thoughts about cutting and editing never came up. Merely a few overdubs were added, like guitar layers and electronic effects from Peter Meyer and flute and synthesizer from Wanja Slavin, to give the sound more depth here and there. With only one exception, Bernhard and Peter Meyer wrote all pieces on Other Animal specifically for this quartet. “We wanted to give the musicians something where they could fully unfold their magic. Jim masters an enormous variety of grooves, so of course we also worked with that.” Consequentially the tempos of the pieces are very diverse and reach from almost Nordic seeming calmness all the way to crescendos with metropolitan verve. Black’s intuitive, free and yet very pointed playing with dynamic and forceful entrances also exhibits a pronounced sense for sound, which again harmonizes perfectly with the Meyer brothers’ sound awareness, their arcs of suspense and their energy made up of both transparent-airy and powerful dense passages. Wanja Slavin brings a sometimes fragile, sometimes rough beauty into the band. Inspired by the revolutionary expressiveness of John Coltrane and Ornette Coleman, Slavin can captivate with sensitive as well as forcefully gripping sounds; some facets of his playing are reminiscent of new music and electronic music. Thanks to Slavin, Peter Meyer’s role in this quartet is a little different than usual. “With the Melt Trio I’m always the soloist, kind of like the singer of the band. In Other Animal I can concentrate on creating specific tonal colors from time to time. Just like guitarist Meyer, Slavin evidently also thinks in structures and textures. Both focus on atmospheric, sharply detailed soundscapes instead of the traditional “faster, higher, further”-competition. Thus they interlock like zippers’ teeth - not only in parallel passages. Or they seem like a tree, whose shoots sprout into different directions. A constant quality of Other Animal, is the compositional modernity of both Meyers, which is guided by their own listening habits. The two early thirtysomethings are not only influenced by the sound of certain jazz greats like Bill Frisell, Keith Jarrett (especially the quartets with Haden, Motian, Redman or Garbarek), Marc Ribot and Terje Rypdal, but also by rock experimenters like Radiohead, James Blake and the Notwist. Exemplarily they mention their piece Nongeniality; a melody that could come from Charlie Parker, but is turned and twisted through the indie-rock filter. To the Meyer brothers the form of the songs is at least as important, as melodic themes and solos. By that, they mean the sequence of parts, arcs of suspense and instrumentation. In these aspects McCoy Tyner and Brad Mehldau are just as much inspirational sources as Weather Report and Grizzly Bear. Above all else is the band’s motto formulating what is best for the music: playing consciously and intuitively, leaving out the irrelevant and standing above vanity and self-display. The title Other Animal represents the unknown and the new, Bernhard and Peter Meyer explain. A band is an organism, which breathes and pulsates. It needs to communicate and be kept alive to amaze with different motions, timbres and developments again and again. In this sense, Other Animal is a very special, charismatic species.